Ever since reading  Robert X Cringley‘s excellent 1996 Accidental Empires book (which actually has the even more excellent full title of Accidental Empires: How the Boys of Silicon Valley Make Their Millions, Battle Foreign Competition and Still Can’t Get a Date), I’ve been interested in some of the history behind the way the PC and internet industry has evolved. I’ve always loved Cringley’s description of Steve Jobs as “The most dangerous man in Silicon Valley”… (in fact, he even opens Accidental Empires with a line akin to the opener from the sadly departed Douglas Adams’ tome, Dirk Gently’s Holistic Detective Agency, which was, “High on a rocky promontory sat an Electric Monk on a bored horse.”)

Many commentators would trace the genesis of a lot of technology we now take for granted back to Xerox Corp’s famed Palo Alto Research Center, aka PARC. The roll call of what was supposedly invented at PARC is long – laser printers, ethernet, the bitmapped display, GUI, mouse, object-oriented programming, distributed computing… the list goes on. 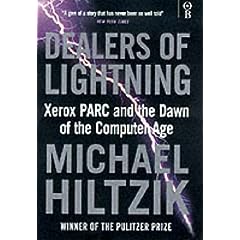 Legend goes a little fuzzy though – not everything that came out of PARC originated there, but a lot of the researchers who worked there in the glory days brought ideas with them and refined them enough to be useful (eg Doug Engelbart, who invented the mouse before coming to Xerox but perfected its use with the new bitmapped displays and Graphical User Interface). Legend also has it (backed up by some fact, in fact) that The Most Dangerous Man in Silicon Valley himself was given a guided tour of PARC’s facilities, saw the Alto computer they’d invented (showcasing their GUI, mouse et al) and became inspired to have Apple launch the Lisa computer, which was the forerunner of the Mac.

Anyway, a few years ago I picked up Dealers of Lightning – a potted history of what happened at PARC, and it really is a fascinating read. It can be a bit heavy going in places but gives a great insight not only into the amazing work they did at PARC (and the disdain the industry poured on Xerox Research for basically inventing the world as we know it but then alledgedly doing nothing with it, because they couldn’t see how it related to selling photocopiers), and it also paints an inspiring portrait of the head of the Computer Science Lab, Bob Taylor.

Taylor’s basic philosophy was to hire people that were smarter than he was (and he was the guy who founded ARPANET, the precursor to the internet, so must be a bit of a smart cookie himself). He also decided, in the CSL, that he couldn’t manage any more than 50 people directly, so he set the cap on that size of organisation (since he didn’t want to introduce layers of management), and just went about making sure those 50 were the best he could possibly find. What an visionary management style, and an amazing story.

It’s also interesting to see how many of the luminaries mentioned in this book as the fathers of computing as we know it, now show up in the Microsoft Global Address List 🙂